July 11, 2017 Jupiter crosses the ‘womb’ line demarcation due to its Retrograde. September 9, 2017 ‘Birth of Manchild’ or Translation of Jupiter. September 23, 2017 Position at Sign Maximum as Jupiter will be 13 days out of ‘womb’ by then December 1, 2017 Jupiter leaves Virgo. Birth of the Manchild. Upon Jupiter’s exit (birth), on September 23, 2017, we see the constellation Virgo with the sun rise directly behind it (the woman clothed with the sun). At the feet of Virgo, we find the moon. And upon her head we find a crown of twelve stars, formed by the usual nine stars of the constellation Leo with the addition of the planets Mercury.

Revelation 12:1-5, Now a great sign appeared in heaven: a woman clothed with the sun, with the moon under her feet, and on her head a garland of twelve stars. Then being with child, she cried out in labor and in pain to give birth. And another sign appeared in heaven: behold, a great, fiery red dragon having seven heads and ten horns, and seven diadems on his heads. His tail drew a third of the stars of heaven and threw them to the earth. And the dragon stood before the woman who was ready to give birth, to devour her Child as soon as it was born. She bore a male Child who was to rule all nations with a rod of iron. And her Child was caught up to God and His throne.

The passage of scripture above has been getting quite a bit of attention lately among Prophecy enthusiasts. It is a passage that comes from the book of Revelation that speaks of “a great sign in heaven” depicting a woman clothed with the sun, the moon at her feet, and crowned with twelve stars. The reason for all the recent hype is due to a coming astronomical alignment that will occur on September 23, 2017 which appears to perfectly fit the description outlined in Revelation 12.

When we read about a sign in “heaven” (often a reference to the sky or space), and specifically read about the sun, moon, and stars, it should help us to realize that this is a literal observable event that will take place in the future. The million dollar question is when will it occur and what’s its significance? Until our modern technological era, there was no way to know when something like this might happen. But due to some great computer software that plots out all of the movements of the planets, stars, sun, and moon, it looks as if September 23, 2017 may in fact be the fulfillment of this great sign in the heavens.

So, if this is a literal sign that Christians are to be watching for, what precisely does it entail? Obviously the scripture speaks of the sun, moon, and stars…but which stars? The clue to this puzzle is the reference to the “virgin”. In astronomy the virgin is the constellation, Virgo. And if Revelation 19 is calling our attention to Virgo, what are the twelve stars that crown her head? Part of the answer to this question is the constellation, Leo, which consists of nine stars. But if Revelation speaks of twelve stars, we are still missing three. Let’s come back to this in just a moment.

Now, for decades Christian astronomers have known that every year right around September the Sun aligns right next to Virgo, “clothing her” with its light, and the moon positions itself under her feet just as stated in Revelation 12. So at first glance, it doesn’t sound like anything new or special is going to happen on September 23, 2017. But here is where this date is different…

About six years ago, Scottie Clarke from ERF Ministries, posted a video on YouTube where he shared an amazing discovery about September 23rd in the year 2017. On this particular date three of the planets in our solar system, Jupiter, Venus, & Mars, will be perfectly aligned right around the constellation Leo, thus completing the “Twelve Stars” that crown the virgin as described in Revelation 12.

After this amazing discovery by Scottie Clarke, many prophesy enthusiasts also used astronomy software to confirm whether or not this is true. Naturally, because this is an astronomical alignment that is observable and can’t be altered, it has been corroborated by many people. What is more interesting is that many of these people, including Clarke himself, have looked forwards and backwards in time for hundreds of years using their astronomy software and cannot find another occurrence of an astronomical alignment such as the one occurring on September 23, 2017. So, what does this all mean? Why should we care? Is this really a sign in the heavens? Well, let me share a few thoughts with you…

Each year as summer comes to a close and fall approaches, I can’t help but get a little excited with anticipation. I get excited because it’s in the fall that the Feasts of the Lord, also known as the Jewish Feast Days take place. What’s so special about the Feasts of the Lord you might ask? They’re special because they are days throughout the year that God Himself set apart as appointed times when He wanted to meet with His people according to Leviticus chapter 23. There are seven specific days, each with its own unique significance that God established including: Passover, Feast of Unleavened Bread, Feast of Firstfruits, Pentecost, Feast of Trumpets, Day of Attonement, and the Feast of Tabernacles. 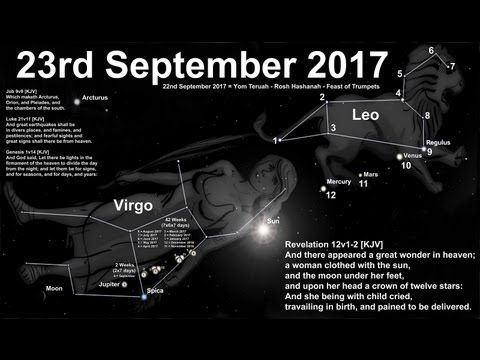 I’m betting that some of you still may be thinking, “Okay, so what? I’m not Jewish, so why should I care about Jewish Feast Days?” and “What relevance does this have to a supposed sign in the heavens on September 23, 2017”? Well, the reason why they’re important is because some very significant events occurred on these days in the past and I believe they could point to upcoming events in the future. Let me explain: Jesus died on Passover. He was buried during the Feast of Unleavened Bread. He rose from the dead on the Feast of First Fruits. Then the Holy Spirit was poured out on Pentecost. So, the question we must ask is if God orchestrated such major events to occur on past Feast Days, isn’t it likely that He would continue doing so? I believe the answer is, Yes!

The next of God’s Appointed times awaiting “fulfillment” is the Feast of Trumpets. If you research this particular Feast Day, you will discover that there is a lot of evidence that points to the rapture of the church. For example, one of the names for this particular feast day is the “Opening of the Gates/Doors” (Psalm 24:7-10). In Jewish teachings, the Feast of Trumpets (Yom Teruah) is part of the “Days of Awe” when it is said that the gates of heaven are opened for God’s people to repent and recommit themselves to serving Him.

This idea of a door opening in Heaven can also be seen in Revelation 4:1 when John was in the Spirit and saw a vision of a door opened in Heaven and hears a voice that sounds like a trumpet which calls him to “Come up here”. He is then immediately caught up into the throne room of heaven. Some Bible scholars contend that this is a picture of the rapture. So, it is interesting that this “sign in the heavens” occurs on the Jewish feast of trumpets that many people believe is associated with the rapture.

Perhaps more intriguing is what is written in the text of Revelation 12. The woman whom is referenced in verse 1 is described as being in labor in verse 2. Continuing on in the chapter, we find in verse 5 that the woman gives birth to a male child whom is “caught up” to God and His throne to protect him from the red dragon mentioned in verses 3-4 that wants to devour him. The English words “caught up” in verse 5 are translated from the Greek word “Harpazo”, meaning “rapture, catch away, or to seize forcefully”. The Latin equivalent for the word, “Harpazo” is “Rapio” from which we derive our English word, “Rapture”. In other words, the male child that is referenced in verse 5 of Revelation 12 is literally “raptured” to the throne room of God.

Now the big question that all of us would naturally ask is, “Whom is this male child”? Answers among biblical scholars vary greatly and are debated. The most common response to the question is that it is referring to Jesus given that He is the only person historically who was birthed from a virgin. However, a differing opinion held by Scottie Clarke is that the male child is actually a reference to the Church. One of the arguments He makes to support this view is the idea that throughout the New Testament, the Church is metaphorically referred to as “the body of Christ” and Jesus is referred to as “the head”. As such, when one considers the normal process of giving birth, it is the head that first emerges from the womb and then the body follows.

Given that Jesus was born, lived, died, and resurrected over 2,000 years ago, Clarke asserts that this future event in Revelation 12 is not a reference to Him (“The Head”) but a reference to The Church (“The Body of Christ”). Admittedly, this opens up a giant can of theological worms with regards to the idea of when The Church was/is born and specifically when a believer is “Born Again” which I won’t address in this post; however, I simply want to point out this intriguing viewpoint and how it can be viewed as possible evidence pointing towards the rapture of the church.

So what does all of this mean? Should we expect the rapture to take place on September 23, 2017? Is this coming alignment of stars and planets to be viewed as a “Sign in the Heavens”? Is the next of “God’s appointed times”, the Feast of Trumpets, about to be fulfilled? My take on this subject is to simply take a step back and watch. Personally I find subjects like these very fascinating and even exciting, but think it is prudent to take the approach that the Bereans did (Acts 17) simply “consider a matter and see if these things are so”. I cannot deny that the astronomical alignment of stars and planets on September 23, 2017 appear to mirror the description portrayed in Revelation 12. Furthermore, in light of all the chaos currently taking place in the world, geological events like earthquakes, hurricanes, and all sorts of deception caused by false teaching, it sure seems like the rapture of the church should be closer than ever. (Jesus, come quickly!) At the same time, however, there is a long history of people being wrong about when the rapture is supposed to happen. It’s very probable that this too will be no different. Therefore, I will be simply watching and waiting. If I wake up on September 24th and am still here, I will continue to carry on, serve the Lord, work to spread the Good News of Jesus, and live as if He could return at any time. If this “sign in the heavens” does happen to come true then I look forward to celebrating with you all in the Kingdom of God and worshipping together with you before His throne!