Brackets is a text editor used by developers for coding. It was originally released in 2014 by Adobe Systems and currently stands as a popular choice for programmers. A modern, sleek interface, combined with a plethora of features and themes makes it to any developer’s top list. If you are still on the fence, wondering if there could be a better text editor for you to use and maximize your efficiency during coding, you’ve come to the right place! We are going to take a look at some of the most popular text editors, to see how they compare to Brackets.

Another popular choice developers turn to is the Visual Studio Code, developed by Microsoft. While it caters to developers who are looking to create cloud applications, this free editor allows developers to create powerful applications from a simple, powerful Multi language IDE supported interface. With the plethora of good plugins available, developers will choose the Visual Studio Code, just as well as Brackets. So, is Brackets better than VSCode? Both of these tools are free to use, but when it comes to Brackets vs VSCode, it really depends on what you are looking for. Both of them are very powerful and support a multitude of different programming languages. If you are looking for unprecedented amounts of customization, combined with a truly beautiful user interface, then Brackets is definitely for you. On the other hand, if you’re looking for superior markdown support, as well as an open source tool you can use, then VSCode will turn out to be a better choice.

Sublime Text is another text editor, offering developers a chance to automate certain tasks and let them quickly navigate throughout their project. Sublime Text understands that programmers deal with huge amounts of code, so it’s interface is organized in a way that allows the user to quickly find their way around large amounts of code. When we’re talking Brackets vs SublimeText, Sublime Text surprisingly comes out on top. Keep in mind that Sublime Text isn’t perfect and has a fair share of problems. Still, among developers, Sublime Text is ranked as the 7th most popular text editor, while Brackets only comes in at number 12. Sublime Text offers a huge amount of keyboard shortcuts and supports a large number of different languages, which is ultimately why Brackets doesn’t fare as well. The keyboard shortcuts and some of the most basic text editor features, which are in the base Sublime Text, have to be downloaded via plugins to allow Brackets to have the same functionality.

Another big player in the programming world is Atom, a text editor developed by GitHub. It came through as the ultimate text editor any developer could ever want. It was first imagined as a tool that you could easily customize to do just about anything you can think of, but also be able to use it from day one without having to tweak any of the configuration files. They wanted to create a modern, customizable, even hackable editor, which is customizable down to its very core, to allow every user to build according to their own tastes. When we are looking at Brackets vs Atom, Atom undeniably wins. Most developers will choose Atom, as it is open source and offers GitHub integration. While Brackets still offers plenty of customization to their users, this is nothing compared to what Atom users can expect.

Remember that all of these text editors are intended mostly for general use. While some of them do offer features that go beyond just average coding, not all of them will have the same level of customization. If you are looking for specific support related to a certain language, you might be better off looking for a text editor that can accommodate. Still, keep in mind that you can still customize a large number of these editors to your exact liking. Some of them, like Sublime Text have a very steep learning curve that isn’t easy to get used to, but once you do find your way around, it’s going to be very rewarding and the amount of things you can achieve through using Sublime Text is going to be huge.

Brackets Is One Of The Top Choices

The main reason people are going to choose Brackets, even though they have a handful of other text editors at their side, is the easy to navigate user interface, complete with a modern design which has a certain flow to it. With a huge number of different plug-ins and extensions users can find, Brackets can be customized and tailored to each developer. Keep in mind that cross-platform comparability is also a feature you will want to look for in a text editor. While most of them are lightweight and made in a way that can allow them to run on Mac, Windows and Linux alike, some of them are actually not compatible with these operating systems, so it does pay off to check which operating systems your ideal editor is going to be compatible with. 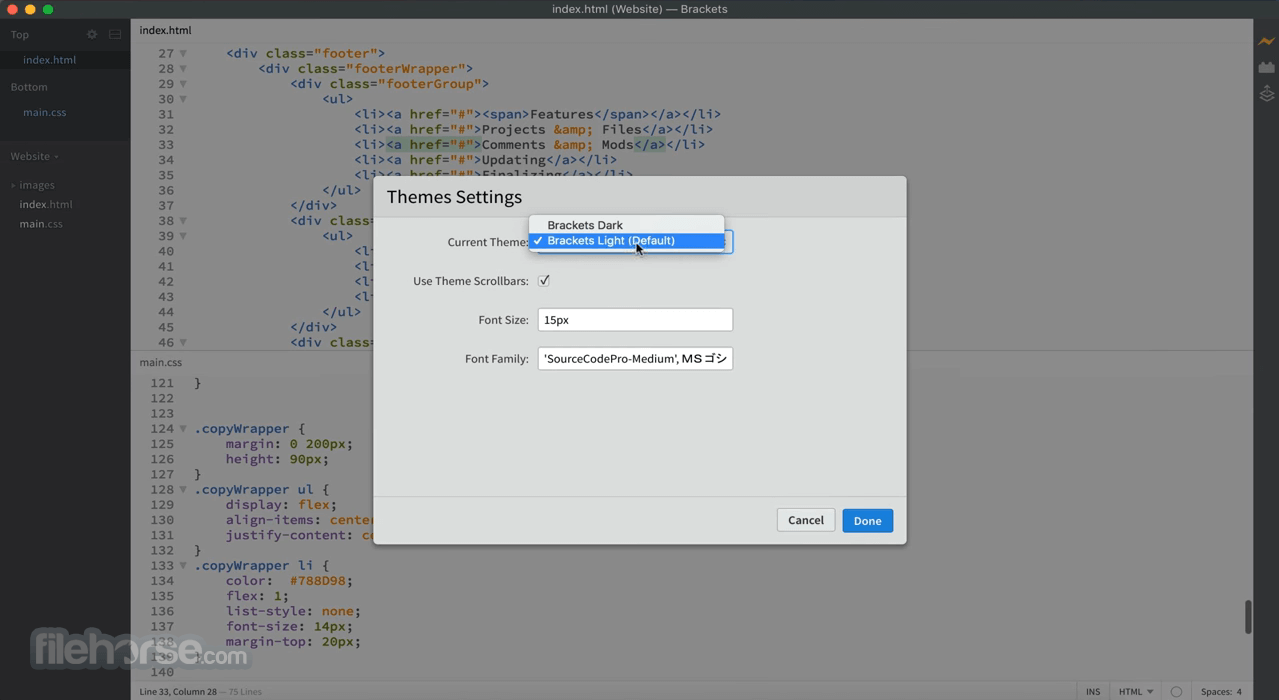 Finally, the feature that ultimately helps developers make up their minds and choose Brackets is the live preview feature. While a lot of developers can already visualize the results of their code, Brackets actually offers a live preview of the code in a browser tab. It opens the tab for you to see any changes that you make in real time, on the page, without even having to refresh for the changes to take place! It is a very powerful advantage that offers developers a chance to see their code in action without having to waste time and test it every once in a while. Each one of these text editors will cater to different needs developers have. It will ultimately be up to you to decide which one of them suits your needs in the best possible way. Undeniably, all of them have a wide array of features to provide and can be easily made to support the needs of your project. All of them are worth looking into, as they are considered to be the top-of-the-line among text editors developers use today.

Brackets is a text editor used by developers for coding. Being a web developer, a lot of your time is going to be dedicated to coding. Although you can use practically any text editor, regardless of whether or not it is designed to write code into, you can certainly save your time and have many perks at your convenience if you use a text editor meant solely for coding. If you are looking for a sleek, modern easy to use text editor, brackets should be your first pick. It was first released during the year 2014 by Adobe Systems. There is a repository available on GitHub. It was created with JavaScript, HTML and CSS and supports both the Windows, Mac and the Linux operating systems. Seeing as it is fairly lightweight, operating system friendly and intuitive, there is no reason not to use it. Let’s find out what you can get out of it and if it could be worth your time!

5Useful Extensions To Consider Adding To Your Brackets Editor

Keep in mind that there are different system requirements based on the operating system you would like to install brackets on. If you are installing brackets for windows, you should ensure you have at least the Pentium 4 Intel Processor, a Windows 7 or Windows 8 operating system, as well as a total of 256 MB with the RAM memory. It is recommended that you have at least 2 GB of RAM available for live development. In terms of space, you’re only going to need 200 MB for brackets. On the other hand, brackets for Mac will require at least Mac OS v10.6, v10.7 or v10.8 in addition to the requirements Windows users have. As you can see, brackets is very easy to install and will not demand a lot from your machine.

Downloading Your Copy Of Brackets

It’s time to see how the brackets download process works. You simply need to visit the developers page to find the latest version of brackets. You can also choose from some of the previous versions that have been released, if you wish, but normally you would be looking for the latest version. This text editor still gets new updates once every three weeks or so, so your best source would be the brackets website. You will immediately see the latest version highlighted with a button prompting you to download the executable file. It is only 77 MB large, so it should download to your computer fairly quickly. Once you have finished downloading it, you can go ahead and find it in the download folder you specified. From there on out, you will need to install brackets before you can use it.

Installing Brackets On Your Computer

The installation is very quick and efficient. It will only be moments before you can launch brackets. This is a free piece of software that is open source. All you need to do is run the installer, follow the instructions and monitor the progress bar until the installation is complete. There’s really not much to it and hardly anything can get in your way of installing it. There are no other prerequisites you should have installed on your computer prior to installing brackets, so it all comes down to waiting for the installer to finish its work.

And now we finally come to the fun part! Before you start using brackets and writing your code, it is worth mentioning that you can go back to the official brackets website. There are also other resources there that could enhance your experience. We are talking about the extensions page, where you can find a myriad of user submitted extensions that you can install into your brackets, in order to customize it to your needs. Although you will find that there are many cosmetic extensions you can download and use, a lot of them are also utility based. Although you might be spending a lot of your time configuring what your text editor looks like, there are a few utility based extensions that you should get. These are seriously going to make your life a lot easier. The best part is that they are all free and that they all make your coding experience that much smoother.

Useful Extensions To Consider Adding To Your Brackets Editor

As you can see, there are a lot of things that make brackets a very good choice for aspiring front-end developers. The amount of customization it offers is amazing it can be all yours for a small price of free! There is really no reason not to use this to your advantage. With brackets continuing to receive frequent updates and so much user submitted content you can use to further enhance and optimize your experience, this is a solid pick no matter which platform you are going to develop for.

If you are tired of your default Brackets theme and would like to switch things up, you might be relieved to know that there is a huge selection for you…