In this article, we are going to discuss how good of a job avast antivirus does to remove viruses from your computer and keeping it safe from threats. We are also going to review its multiple features and pricing along with the UI design, security as well as the user support to review Avast Antivirus Pro 2019.

All in all, Avast antivirus does a good job of being in the top end of the antivirus market and is cheaper than most of the top antivirus softwares available. It has most of the features that you may need from an antivirus and is light on the system.

Avast Antivirus Pro 2019 has a lot of features mixed together in a small package. The amount of features at the given price is really good when compared to what the competitors of Avast are offering for higher prices. Avast Antivirus provides you security from all the basic viruses out there and along with that provides features which can make your internet browsing safe and offers protection against network based attacks which can harm your computer.

Avast Antivirus 2019 allows you to monitor the behaviour of different softwares to sniff out suspecting activities for viruses that were previously not present in the database. Along with these security features, we also get a feature called Sandbox mode which can be used to run files in a secure environment when they are downloaded from an unsure source. It also comes with a handy password manager tool where you can save all of your important passwords for easy retrieval.

Avast Antivirus has a sandbox more which isn’t seen in most of the other antivirus softwares out there. It can be used to test potentially dangerous softwares which can cause harm to your computer if opened otherwise. It is also useful in testing out softwares which you have developed.

The secure browsing feature of Avast Antivirus Pro 2019 is a neat and useful thing to have. It basically runs a dtripped down version of Google Chrome which is not linked to google in any way and has privacy extensions installed by default. It can be used to carry out important and delicate tasks like banking and other things that require privacy.

Another useful extension in the Secure Browsing Mode is a video downloading tool. It allows you to grab videos from sites which do not allow downloading videos by default like Youtube and other video sharing websites like Vimeo. However, it fails to capture content from protected video streaming platforms like Netflix as well as Amazon Prime.

Secure browsing mode also comes with a feature which is called Bank Mode which is a different desktop altogether which can be used to carry out sensitive bank tasks and is not vulnerable to viruses which can control browser windows in computers.

Avast Antivirus Pro 2019 also comes with Real time web monitoring for popular browsers like google chrome and firefox which comes in the form of extensions. It provides a level of security to normal browsers too if you don’t opt to use the secure browser provided with avast. It can be used to prevent phishing attacks and other potential DNS manipulation attacks which are common nowadays where attackers can redirect you to their phishing site even when you enter the correct website url in the address bar of your browser.

One of the best and unique features that comes with Avast Antivirus Pro is a Wifi inspector. It is a software which scans all of your network where your computer is connected – either home or public. It then checks for vulnerabilities on the network to which you are connected to. This feature is very useful if you want to know if any computer on the network is affected or the router is affected and can harm your computer.

Avast Pro uses a perfect interface that reflects the free advertising. The background throughout the software is grey and the greys are supplemented by dashes of green with four tabs which houses the multiple features that can protect you. The user interface is on par with the best antivirus softwares out there

There are four tabs, yet you’ll just utilize three to get around. Tapping on any of them will raise a menu with symbols for the respective functions that are spread out like tiles. A few highlights that Avast Antivirus Pro 2019 doesn’t offer, for example, the ransomware shield, will appear with an orange lock beside the symbol.

There are some more features like the ransomware shield which have the lock symbol. For example, the secureline vpn function is locked and you have to purchase it to unlock the function.

The first thing that people want from an antivirus is protection from viruses. So, let us look at how Avast Antivirus Pro 2019 protects your computer from viruses and other malwares.

Avast Antivirus 2019 has focused on, full and boot checks, however one of the best feature of Avast is Smart Scan. It runs the ordinary antivirus cleaning processes, yet additionally checks your machine for threats to the system, harmful browser add ons as well as execution issues for softwares. 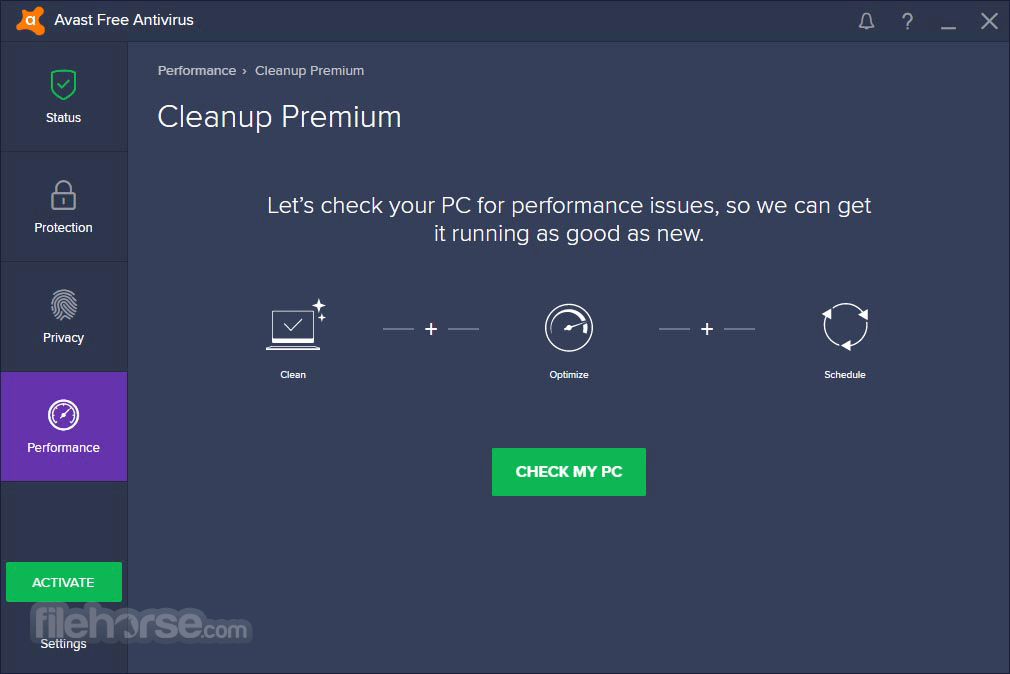 You can download Avast Antivirus Pro 2019 for free at the official website of Avast Antivirus. The free version of Avast Antivirus comes with ads which can make the UI look cluttered. If you purchase the antivirus, the ads are removed and you get additional functions like protection against ransomwares and more.